This blueberry kale smoothie takes minutes to make and is absolutely loaded with good-for-you ingredients! It’s super flavourful and makes for a great start to your day or afternoon snack.

So today is the official first day of summer!! Woot woot! Bring on the nice weather! Did you know that it’s also the longest day of the year and it’s National Vanilla Milkshake day?

I read recently that milkshakes weren’t initially suitable for kids because they contained alcohol. Just imagine! I would never have guessed that since it’s such an iconic fun kid friendly beverage, especially now.

It’s been, like, forever since I’ve had a milkshake. I’m more inclined to have a smoothie than a milkshake. How about you? What would be your favourite flavour? My favourite ice cream flavour is mint chocolate chip hands down and then second would be strawberry.

I’m so happy that summer has officially begun. Hubby and I have been spending a lot more time in our yard and furry child has been doing lots of running around. Our little herb garden is coming in nicely and I think that our rhubarb is finally ready to cut.

I’ve been on a real blueberry kick lately. Blueberries everywhere! And I love kale. Perhaps next to cauliflower, it’s my favourite vegetable.

I wanted to try a green smoothie, meaning using some veg in there. I had this lovely bunch of kale that I had recently picked up. Wondering what to pair with it, blueberries came to mind. I was thinking that their colour (and sweetness) would go nicely with the kale.

This yummy smoothie has only five simple ingredients. Aside from the blueberries and kale, the liquid base is coconut water (so refreshing). To sweeten things, I added maple syrup. Then to finish and to add extra nutrition and heft, I added chia seeds.

Hubby loves all kinds of vegetables, like myself. He was mowing the lawn while I was making the smoothie. I poked my head outside, called out to him and handed him the drink, not saying exactly what was in it.  I figured I wasn’t going to tell him it was a smoothie was kale (not that he would mind anyway), but I wanted to get his opinion and see if he noticed it in there. Guess what? He loved it!

This blueberry kale smoothie has lots of blueberry flavour, but once you know there is some kale in there you can get a slight hint of it and it’s awesome!

Can I Use Spinach Instead of Kale?

Most definitely! Baby spinach is a great substitute for kale in this smoothie.

Next time you are thirsty and looking for something different, give this smoothie a try and you won’t be disappointed.

If you make this blueberry kale smoothie recipe, be sure to leave a comment below! 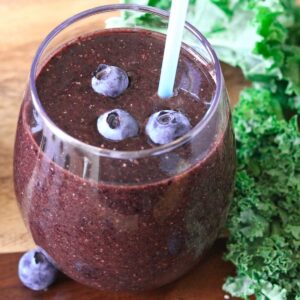