Take a simple canned tuna and elevate it with a scrumptious, hearty toasty sandwich on ciabatta. This tuna sandwich without mayo is loaded with lots of veggies, tuna and muffuletta spread for extra flavour. Such a delicious lunch idea or dinner with your favourite side.

If you’re trying to mix up your lunch routine, have I got the sandwich for you! This loaded tuna sandwich with veggies and muffuletta spread (more on that in a bit) is so satisfying and delicious.

I love recipes using canned fish. They come together quickly and taste so darn good! Plus, canned fish is pretty readily available and always stocked in our pantry. A couple of my favourites are this tuna melt recipe and tuna salad with Greek yogurt.

This yummy handheld bite, though, is a tuna sandwich without mayo (or Greek yogurt, for that matter).

The tuna really shines through here. Use good quality tuna (I love tuna in oil for this sandwich) and just use as is.

In this ciabatta sandwich, the tuna is piled on with lots of veggies for crunch and punch-ya-in-the-taste-buds muffuletta spread (which adds some oil and richness).

What Is Muffuletta Spread?

“Muffuletta” or “muffaletta” is essentially a flavour-packed condiment that is oil based and contains olives, veggies and seasonings. You can typically find in the grocery where you would find pickles, roasted red peppers, olives, hot peppers and the like, in the condiment section.

It can take an ordinary sandwich from good to great!

Though muffuletta is nothing like mayo, it can be a great substitute for mayo in the fact that it adds a little indulgence to the mix.

Once I made this loaded tuna sandwich, I devoured it right away. However, if you have the time, it’s even better after the sandwich is tightly wrapped up and the ingredients are pressed together. Store in the fridge for a few hours and then head to flavour town!

It gives the ingredients a chance to meld together and the oil from the muffuletta sandwich spread to absorb into everything. So good! Plus, this is such a fabulous picnic sandwich.

How To Make This Tuna Sandwich Without Mayo

Full details on how to make this sandwich are in the recipe card below, but here are the basics:

If you make this no mayo tuna sandwich, be sure to leave a comment below! 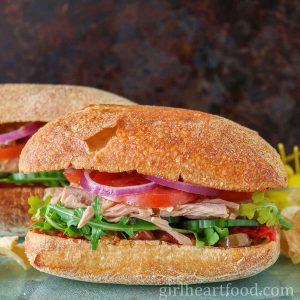 Dawn | Girl Heart Food
Take a simple canned tuna and elevate it with a scrumptious, hearty toasty sandwich on ciabatta. This tuna sandwich without mayo is loaded with lots of veggies, tuna and muffuletta spread for extra flavour. Such a delicious lunch idea or dinner with your favourite side.
5 from 6 votes
Print Recipe Save RecipeSaved!
Prep Time 10 mins
Total Time 10 mins
Course Lunch
Servings 2 sandwiches
Prevent your screen from going dark