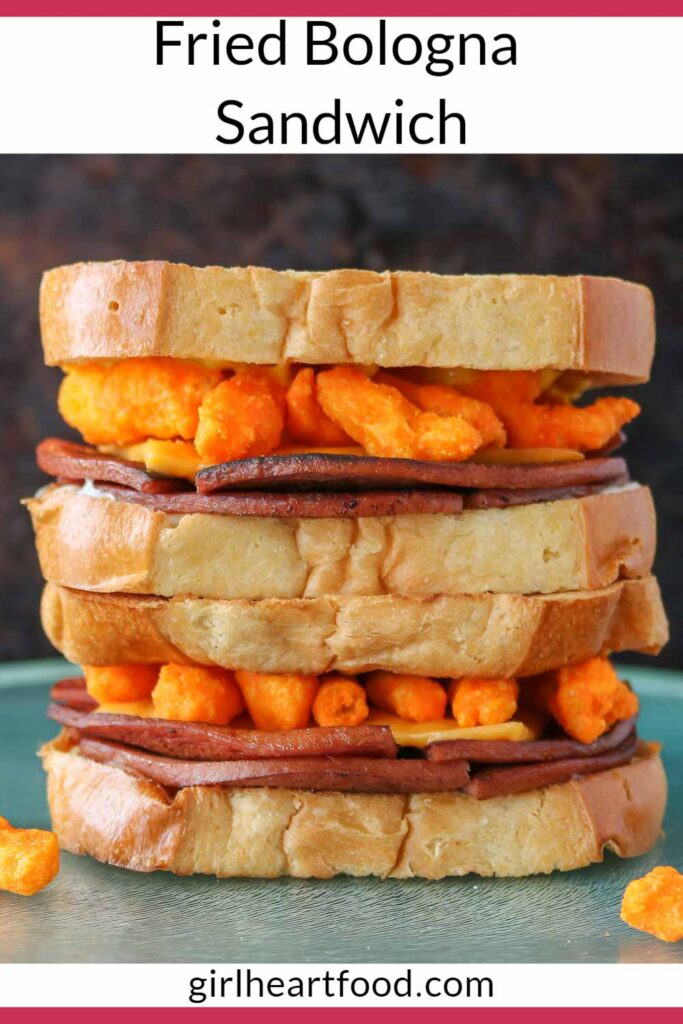 “Bologna” or “baloney”? Which way do you pronounce it? I often say it both ways these days. However, growing up, it was always “baloney.”

Whether it was cold baloney sandwiches, fried baloney and eggs or simply a slice of baloney on a plate with a happy face on it (made out of ketchup and mustard … thanks dad), baloney was pretty much a staple in our home. Granted, we wouldn’t be eating the stuff every single day, but we always had some in our refrigerator.

With cheese, crispy fried bologna (or baloney), a decent smear of yellow mustard and mayo, and crunchy cheese puffs, this bologna sandwich recipe is definitely what I would consider a treat (just like this grilled peanut butter and jam grilled cheese sandwich).

There is nothing fancy going on here. Actually, quite the opposite. When I make bologna sandwiches, I always prefer processed cheese slices (a thick variety for extra cheesy goodness) and a simple sandwich bread, like white or brioche. That’s not saying you can’t use another variety of cheese, like cheddar, or a whole wheat bread. I just like the simplicity of those ingredients for this particular type of sandwich. And, while I drink very little soda, I have got to have some with my fried bologna sandwich! You too?

By the way, if you are a fan of cold cut sandwiches, check out this mortadella sandwich and Italian cold cut sub sandwich recipes.

I like to make some slits (about 3 or 4) around the circumference of the bologna slices so they fry up nicely. This helps them to fry flat (rather than puff up or curl) so the slices get crispy.

Some people like their bologna super crispy, others not so much. You can fry the bologna to how you like it best.

Tip: This recipe uses four slices of bologna. Use a large cast-iron skillet so the bologna slices fit in there without overlapping (that way they’ll crisp up nicely) or cook the bologna in batches (two slices at a time).

Do I Have To Fry the Bologna?

Not at all! Fried bologna adds a little different texture to the sandwich. However, if you prefer a cold bologna sandwich, that’s perfectly delicious too. And if you’d rather not toast the bread, then don’t.

For an extra layer of crunch and flavour (not to mention fun), add some crunchy kettle chips or crunchy cheese puffs (like Cheetos or Cheezies). Just keep in mind that the longer the sandwich sits, the chips or cheese puffs will get a tad soggy. Or, if you’d rather skip adding them to the fried bologna sandwich, have them on the side!

Tips For Making This Sandwich

If you make this fried bologna sandwich recipe, be sure to leave a comment below! 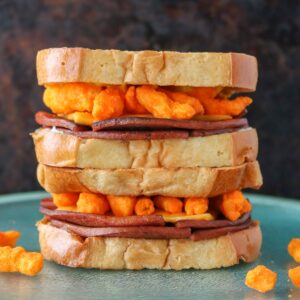