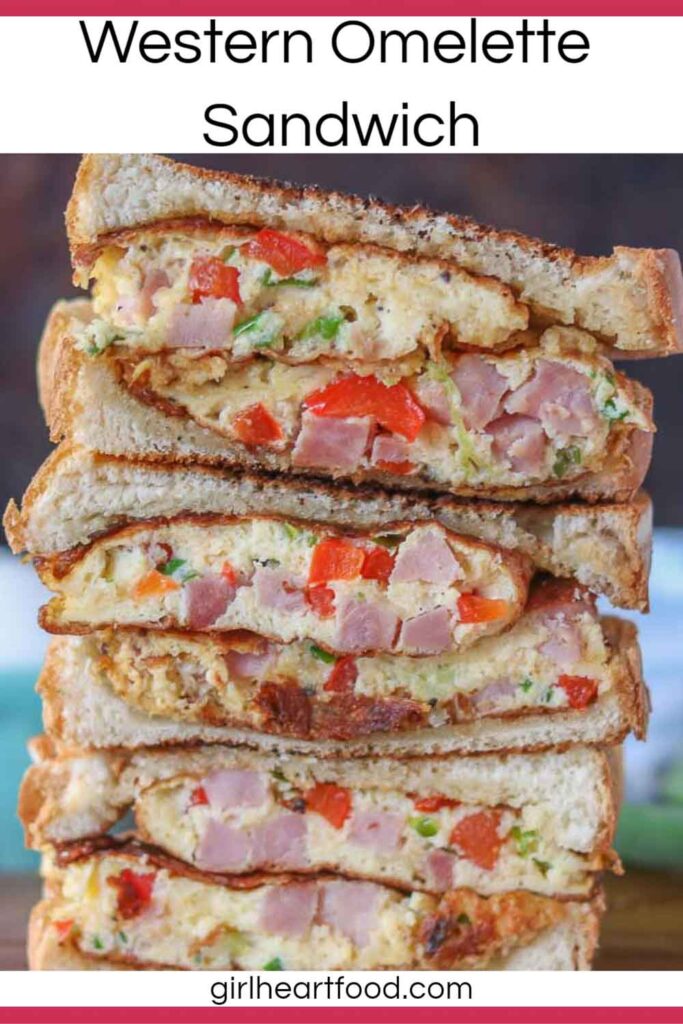 This Western sandwich, also known as a “Denver sandwich,” is basically an easy omelette recipe with ham, bell pepper and onion stacked high on toasted bread. While totally optional, cheese is added to the mix for extra yumminess. This classic egg sandwich is delicious for a summer picnic, as a hearty breakfast, lunch or dinner with a side!

Today I’m sharing my pop’s famous (well famous in our family), Western sandwich! Pop is my grandfather and he is the best! Whenever I’m craving a little comfort food or if I know I’m visiting Pop (or he is visiting me), I’ll ask for one of his delicious egg sandwiches.

While my pop was working in Toronto many years ago when he was just a young fella, he stayed with his friend’s family. During that time, he learned how to make this Western omelette recipe. Pop also learned how to make proper cabbage rolls from them (I’ll be sharing that one with you all one day too).

So, what makes Pop’s Western omelette sandwich so special?

It’s special because he made it!

Seriously, though, he has a couple of little secrets that makes this egg sandwich delicious!

It’s no wonder why I love garlic so much! It must run in the family because Pop is a big fan too.

I didn’t try to exactly replicate Pop’s egg sandwich recipe. It’s simple but so good, and I know it wouldn’t be the same as his; know what I mean? I put my own little spin on there but definitely kept that garlic powder.

What Goes in a Western Omelette?

The basic ingredients of a western omelette are:

Because I’m obsessed with cheese, I added a little in here too. Not traditional (and optional), but it’s delicious.

How Many Eggs Do I Need for an Omelette?

Two eggs is a good number. One is not enough to hold the toppings, in my opinion, and 3 is quite a substantial sandwich. The middle (or 2 eggs) is just right!

How To Make an Omelette

You start by cooking some bell pepper in a frying pan for a minute or so until a little softened (if you like a little crunch, skip this step).

Then, place cooked bell pepper in a bowl with eggs, salt, pepper, garlic powder, cooked bologna or ham (Pop prefers bologna, but I used ham) cheese and onion. Give everything a whisk.

Heat some butter in a non-stick frying pan and when it’s melted pour in the egg mixture. As it cooks, release the cooked egg from the edges of the pan with a spatula and gently swirl the egg around the pan to allow the uncooked egg to flow around and underneath.

Flip over and cook other side or fold into a half-moon shape and cook that way (which is what I did because it was a tad easier). We’re not making a French omelette recipe, so a little colour on the eggs is okay!

Best Bread To Use

Normally I’d go ahead and suggest something artisanal from your local bakery, something with lots of seeds and a nice, chewy golden crust. But, honestly, soft white sandwich bread is my choice for this egg sandwich recipe. Nothing fancy but a match made in heaven with the Western omelette.

What To Serve With This Western Sandwich

Any of these sides pair lovely with this breakfast sandwich:

Or simply enjoy as is!

Whether you call it a Western sandwich or Denver sandwich, hope you love this easy egg recipe as much as we do!

If you make this Western omelette sandwich recipe, be sure to leave a comment below! 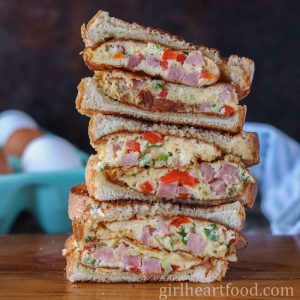 Dawn | Girl Heart Food
This Western sandwich, also known as a "Denver sandwich," is basically an easy omelette recipe with ham, bell pepper and onion stacked high on toasted bread. While totally optional, cheese is added to the mix for extra yumminess. This classic egg sandwich is delicious for a summer picnic, as a hearty breakfast, lunch or dinner with a side!
5 from 14 votes
Print Recipe Save RecipeSaved!
Prep Time 5 mins
Cook Time 15 mins
Total Time 20 mins
Course Breakfast, Lunch
Servings 2 sandwiches
Prevent your screen from going dark