These crispy pan-fried cod tongues are a traditional Newfoundland recipe that can be enjoyed as an appetizer or as a main dish with a side. They’re seasoned, lightly dredged in flour and fried until golden brown. Easy and delicious!

You read the recipe title correctly.

This is a recipe for cod tongues.

If you’re from Newfoundland, this is more than likely not odd for you.

If you’re not from Newfoundland, you may be a little perplexed. But, please stay with me here. They’re really yummy! Think of them as little cod nuggets; essentially, nuggets seasoned well, dredged in flour and fried in olive oil until crispy, golden brown and scrumptious.

You see, this is a traditional Newfoundland recipe. As you may have heard me say before, Newfoundland has a deep rooted history in the cod fishery. We have all sorts of recipes for cod in these parts, all unique and delicious.

What I particularly love about the concept of this recipe is that it uses a part of the fish that may often get overlooked. It’s using something aside from the most commonly used parts, like the fillets.

One random Saturday, hubby and I went to see my parents. It turned out to be an impromptu visit on a lovely sunny day and we ended up staying and enjoying a casual dinner of steamed mussels and, you guessed it, crispy fried cod tongues.

As dad was cooking, I watched closely, carefully taking note of everything he was doing and asking questions. I thought, it would be a great idea to share another popular recipe from where I’m from. So, suffice to say, I’m excited to be sharing this recipe with you all today!

What Are Cod Tongues?

The cod tongue is actually a muscle in the cod fish neck, but they’re commonly referred to as the former.

If you put it out of your head that it’s a tongue or neck muscle, it’s actually quite delicious. They’re meatier and denser than, say, the flesh or the type of meat you would get from a fillet.

What Size Should I Look For?

I prefer smaller cod tongues. I tend to find the larger ones more fatty and have somewhat of a jelly consistency in areas. Some people go for that, though.

How Many Do I Need?

I used about 1 pound in this recipe. The actual quantity that makes up that pound can vary, depending on their size.

Since I opted for those on the smaller size, my pound comprised about 35 to 40 pieces. However, on average, there would be roughly 30 tongues in a pound.

Bottom line: Allow for 6 to 8 cod tongues per person for an appetizer. If enjoying as a main, you may want a couple more, plus a side dish.

Ingredients Needed for This Recipe

Traditionally, people often fry cod tongues in rendered pork fat. I prefer to use oil. Use what you enjoy best!

How To Make This Cod Tongue Recipe

Note: You’ll want to cook the cod tongues in batches, replacing the oil, as necessary, between batches.

Can I Make These Ahead of Time?

This recipe comes together super quickly and are best enjoyed as soon as they are made while they are fresh and crispy.

What To Serve With Cod Tongues

As mentioned above, I love to serve cod tongues with some fresh lemon and tartar sauce for dipping. Some hot sauce would also be lovely.

You can certainly enjoy as they are, but if making things more of a meal enjoy with:

If you make this traditional Newfoundland cod recipe, be sure to leave a comment below! 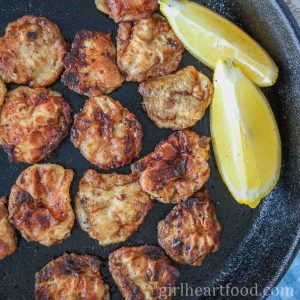 Dawn | Girl Heart Food
These crispy pan-fried cod tongues are a traditional Newfoundland recipe that can be enjoyed as an appetizer or as a main dish with a side. They're seasoned, lightly dredged in flour and fried until golden brown. Easy and delicious!
5 from 16 votes
Print Recipe Save RecipeSaved!
Prep Time 10 mins
Cook Time 30 mins
Total Time 40 mins
Course Appetizer, Main Course
Cuisine Newfoundland
Servings 4 appetizer servings or a main with a side
Prevent your screen from going dark