Homemade bbq sauce recipe made with blueberries?  Yep!  This Blueberry BBQ Sauce is so much tastier than any store-bought bottled sauce.  There’s just a touch of spice and a little sweetness…all perfectly balanced. With very little prep and some cook time, you’ll be left with the tastiest homemade bbq sauce that can be used on so many things. 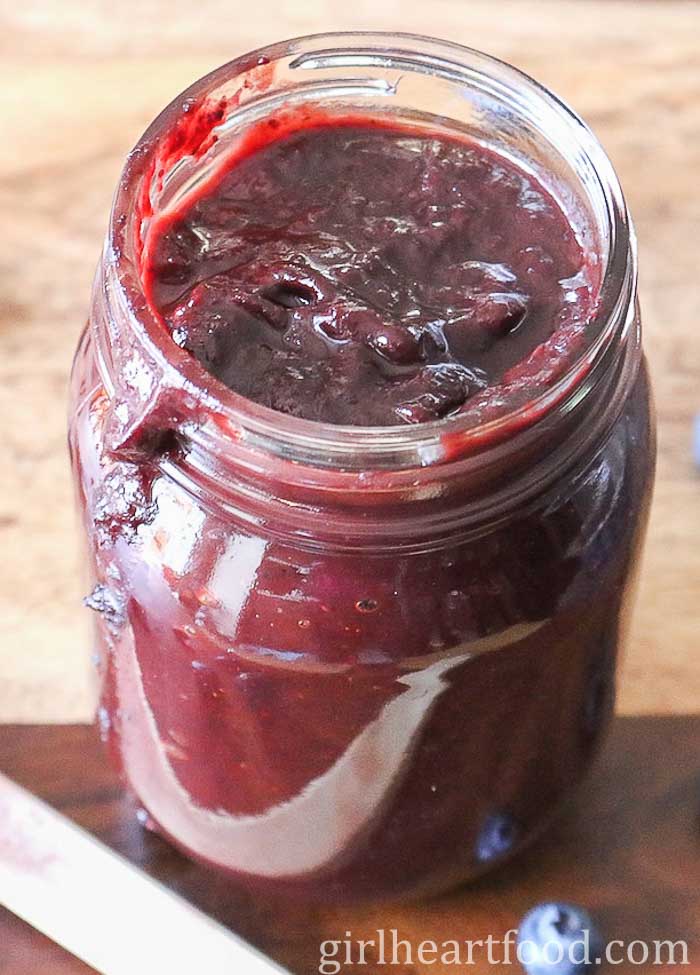 This easy blueberry bbq sauce recipe was originally posted May 2016, but has been updated with further recipe details.

Hey everyone!  How’s it going?  How was your weekend?  Do you guys watch Chef’s Table on Netflix?  They just released Season 2 and it’s unreal.  I really enjoy that show.  For those of you who are unfamiliar, it’s basically a series showcasing various chefs and their restaurants, their stories and some amaaaazing food.  I swear, every time I watch that show I get so inspired and it puts me right in the mood to cook.  Ok, well I’m usually always in the mood to cook, always in the mood to eat, but even more so after watching this.  Some of the food, though, is like art.  You should totally check out this show. Do you guys have any show recommendations?  Always up for checking out something new, especially when it involves food! Anywho, onto this fruit bbq sauce, shall we?

What Goes in Blueberry BBQ Sauce?

Speaking of food, how about more food, lol?  It’s so awesome to use ingredients in unexpected or non-traditional ways.   Like, making homemade bbq sauce with blueberries!  I love experimenting in the kitchen and it’s definitely my happy place.

So, what goes in BBQ Sauce? The base of many homemade bbq sauce recipes is ketchup.  That is definitely in this blueberry barbecue sauce recipe, but besides that there are –

How to Make BBQ Sauce? 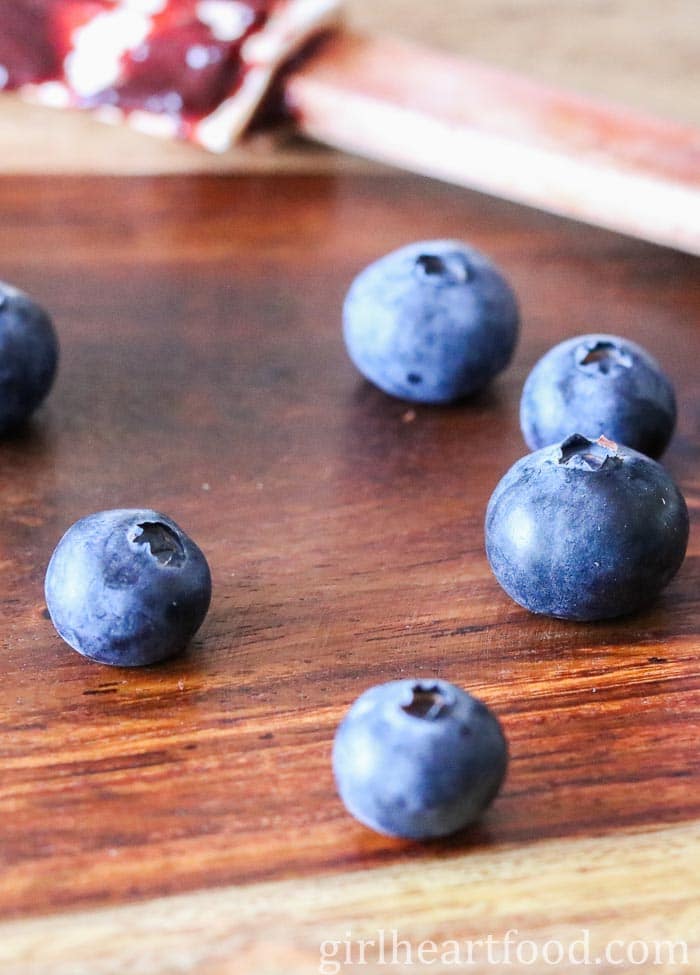 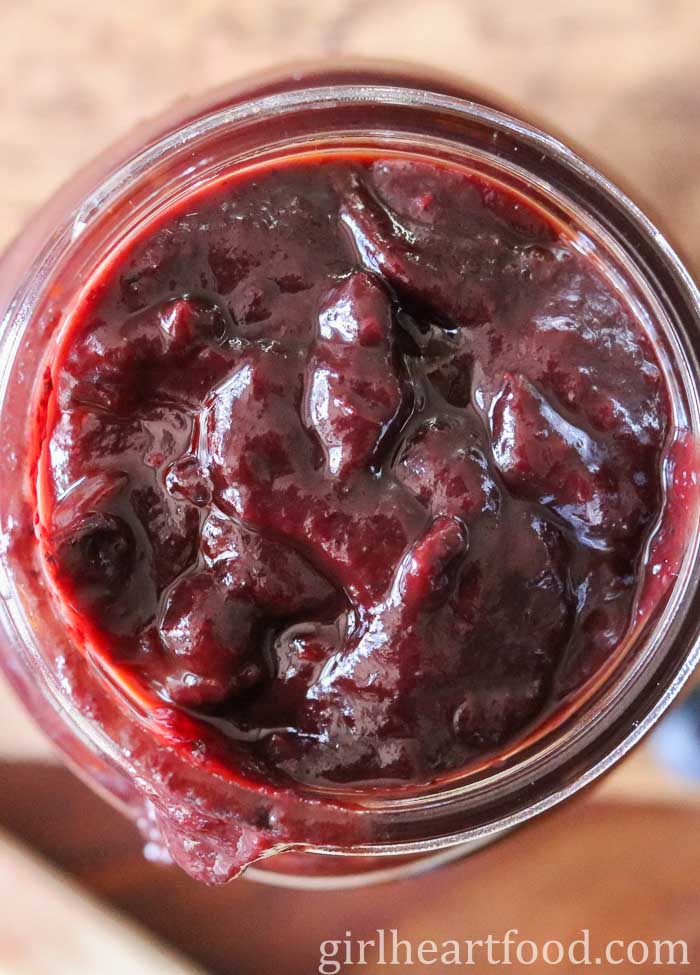 How to Thin Barbecue Sauce?

Is this blueberry bbq sauce too thick? No worries!  Just thin it out with a touch of ketchup or water, starting with about 1 tablespoon. Be careful not to add too much so that the flavours are diluted.  Remember, you can always add more, but can’t take away.

How to Thicken Barbecue Sauce?

Is your blueberry barbecue sauce too thin?  Continue cooking until it reduces OR thicken with a cornstarch slurry (use about 1 tbsp of cornstarch mixed with 1 tbsp of cold water. Stir and mix into bbq sauce).

How to Use this Blueberry Sauce?

This homemade bbq sauce recipe is legit good, you guys, and always gets rave reviews from those that make it (dare I say the best bbq sauce recipe??). It’s delicious on SO many things, but some of my faves are –

Do I Need to Refrigerate Homemade BBQ Sauce?

Yes! Store, covered, in the fridge. 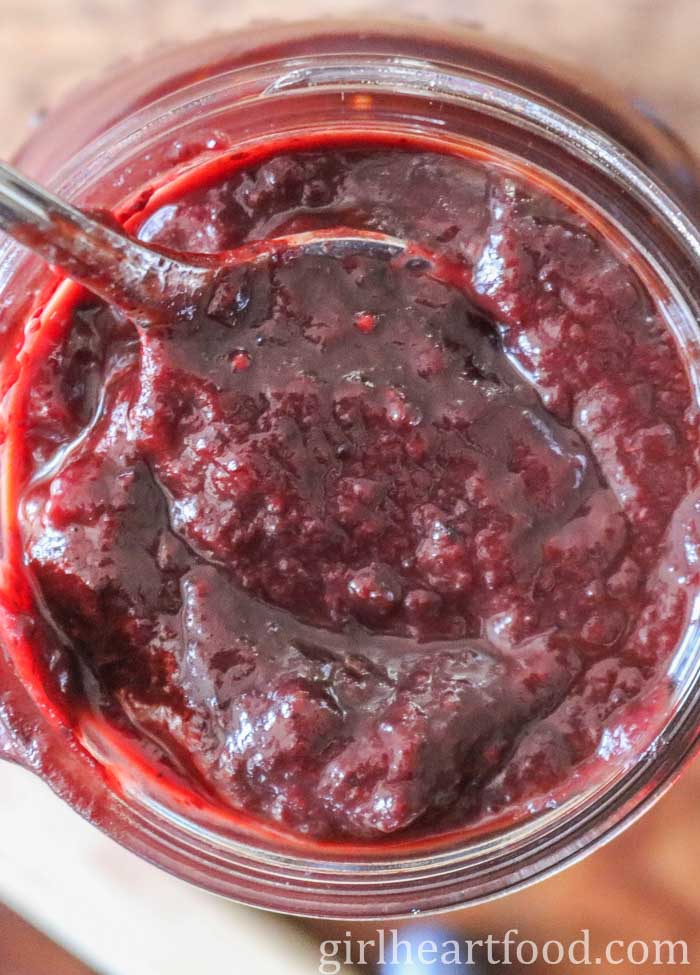 Enjoy this Homemade BBQ Sauce Recipe? You May Enjoy These Too

What ingredients have you used in unexpected ways?  I’d love to hear!  It’s always nice trying new things.  This upcoming grilling season is the perfect time to try this bbq sauce from scratch.  It’s an easy recipe, delicious and there’s load of antioxidants in those blueberries.

Hope you love this easy blueberry bbq sauce as much as I do.

Until next time, take care and chit chat again soon,

© Girl Heart Food.  All images and content are COPYRIGHT PROTECTED. Please do not use any images without prior permission.  Please do not republish this recipe.  If you want to reference this recipe, link directly back to this post. Thank you.

Hi & welcome to Girl Heart Food! I’m Dawn and I’m so happy you stopped by.  Around here, you’ll find lots of yummy eats from veggie based to gluten free to classic comfort food fare. You’re bound to find something that’ll make your belly happy!