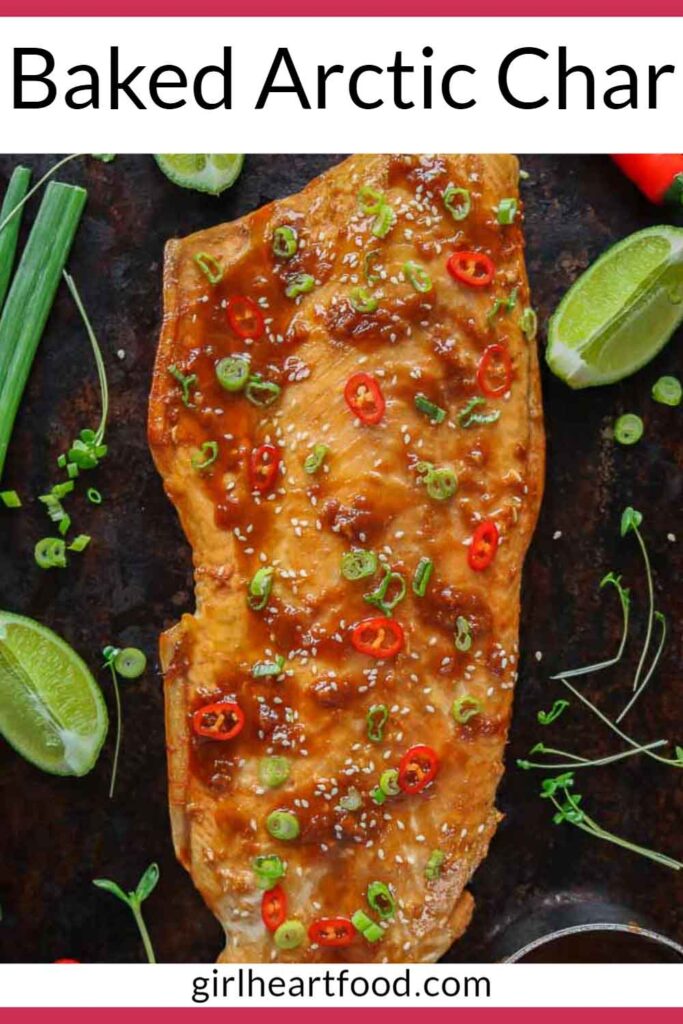 This baked arctic char fillet with honey soy marinade makes for one easy (and scrumptious) seafood dinner that’s sure to be a family favourite!

I love using Newfoundland & Labrador (or Canadian) ingredients (like this moose stew recipe) whenever I can. So, when I got my little hands on some arctic char, I was elated!

This fish fillet is locally (wild) caught in Labrador. How cool is that? My parents often go snowmobiling in Labrador and they picked up a fillet for me at a local fish supply store that’s known for its arctic char.

A whole fillet is baked on a sheet pan and, when it’s all done, it’s garnished with colourful (and flavourful) ingredients, like chili pepper, sesame seeds and green onion. Sounds good, right?

Arctic char fish (or “arctic charr”) tastes like a cross between freshwater trout and salmon (more closer to salmon (specifically Atlantic salmon), if you ask me). If you enjoy salmon (like I do) you’ll likely enjoy arctic char as well!

It’s interior flesh can range in colour from a pale pink (like what was used in this recipe) to more of a brighter deep red hue.

Guys, this honey soy marinade is unbelievably easy to whip up and so freaking good! There’s soy sauce, honey, hot sauce, garlic, ginger, and sesame oil. With those flavourful ingredients, you know it’s going to be tasty!

How To Cook Arctic Char

You cook arctic char much like you would salmon. Even if your fish is labeled “boneless,” I always recommend checking for bones before preparing.

Note: Detailed instructions on how to cook arctic char are in the recipe card below, but here are the basics:

How Long To Cook Arctic Char

The fillet that was used in this recipe was about 1 inch thick (at the thickest part). With the oven set at 400 degrees Fahrenheit, I like to cook the arctic char between 12 to 15 minutes (it’s usually good for me at the 12-minute mark).

Note: Cook time can vary, depending on the temperature of your seafood before cooking and its thickness. Heat until it’s cooked through, is opaque and flakes easily with a fork when prodded.

Can I Eat the Skin?

Indeed you can. However, because this arctic char is baked (and not, say, pan-fried), the skin doesn’t get crispy so I don’t eat when it’s prepared this way.

If you like to remove and crisp up, you can totally do that! Serve on the side or crumble over your cooked fish.

Is Arctic Char a Sustainable Fish?

What I love about arctic char (specifically the fillet used here) is that it’s wild-caught and also sustainable seafood.

This cold-water fish can also be found farmed, but if I can get access to wild, that’s what I’m going for!

Can I Make This Recipe With Another Type of Fish?

Absolutely! I realize that not everyone may be able to obtain arctic char fillet.

Still want to try this marinated seafood recipe? Use salmon fillet instead!

Sides To Serve With Fish

The star of this fish dinner is the arctic char, in my opinion, but if you are looking for some sides to make it more of a meal, it’s delicious with any of these:

If you make this baked arctic char recipe, be sure to leave a comment below! 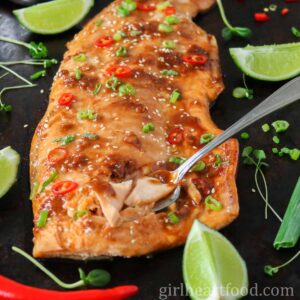