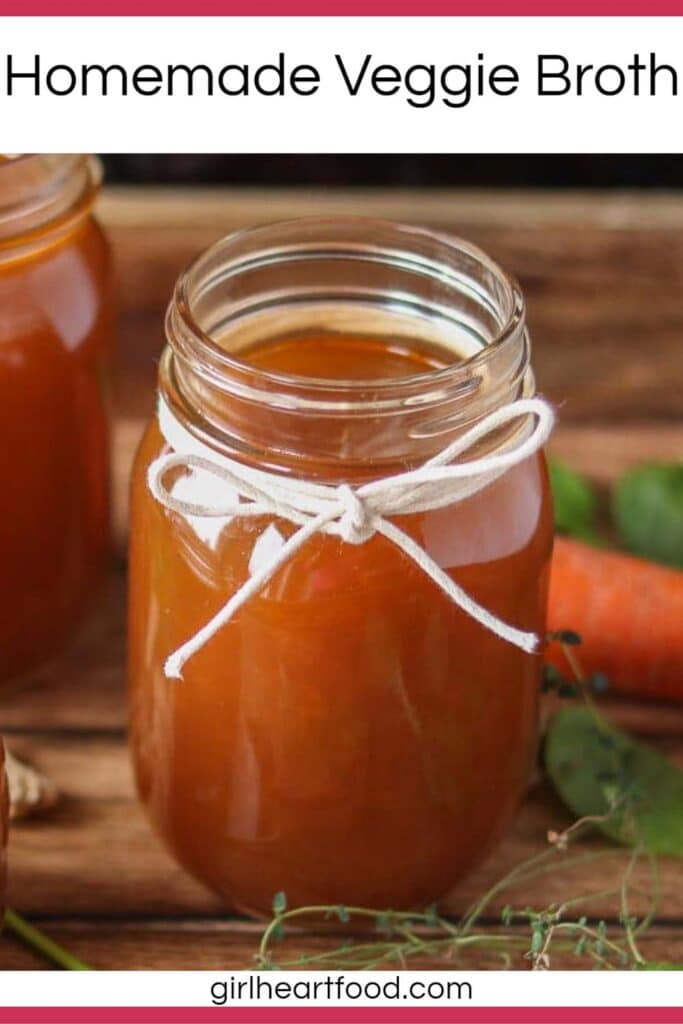 Forget store-bought, the best vegetable broth is homemade! This homemade veggie broth is infused with tons of savoury and rich veggie flavour. It adds so much oomph to all your homemade soups, stews, sauces, and more!

Sharing a pretty simple recipe today that could be the base of so many delicious eats.

I use vegetable broth on the regular, so I figured I’d make my own.

I’ve been wanting to sharing this broth recipe with you all forever!

This homemade veg broth, gets rich colour and flavour from tomato paste and dried mushrooms (one of my favourite ingredients for broth).

It’s seriously good, like drink a hot-cup-of-it good, especially after coming in from outside on a cold day. So relishing!

How To Make Vegetable Broth

Full details on how to make this homemade vegetable broth are in the recipe card below, but here are the basics:

What’s the Difference Between Stock and Broth?

However, there are some differences.

Stock is typically made from bones and has a more neutral flavour than broth. Because of the release of collagen/fat and longer cook time, stock has a thicker consistency than broth.

Broth, on the other hand, is usually made from veggies and/or meat and herbs. It’s seasoned and its consistency is typically thinner than stock (because of a shorter cook time).

When it comes to a veggie-based broth or stock, people often use “vegetable broth” and “vegetable stock” reciprocally (and, of course, there are no bones in veggie broth).

To Peel or Not to Peel

Peeling the veggies is a matter of personal preference and how fresh those veggies are.

You can scrub them clean and not peel, should you wish.

For me, I often prefer to peel.

Can I Make Broth From Veggie Scraps?

Absolutely! If you’ve saved veggie scraps (peels and the like from things like carrot and parsnip), use those too. Just ensure they’re clean and free from any odd or spoiled bits (don’t use those).

Ways To Use Vegetable Broth

If you make this homemade vegetable broth recipe, be sure to leave a comment below! 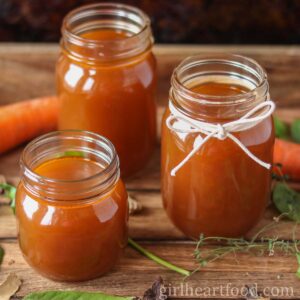