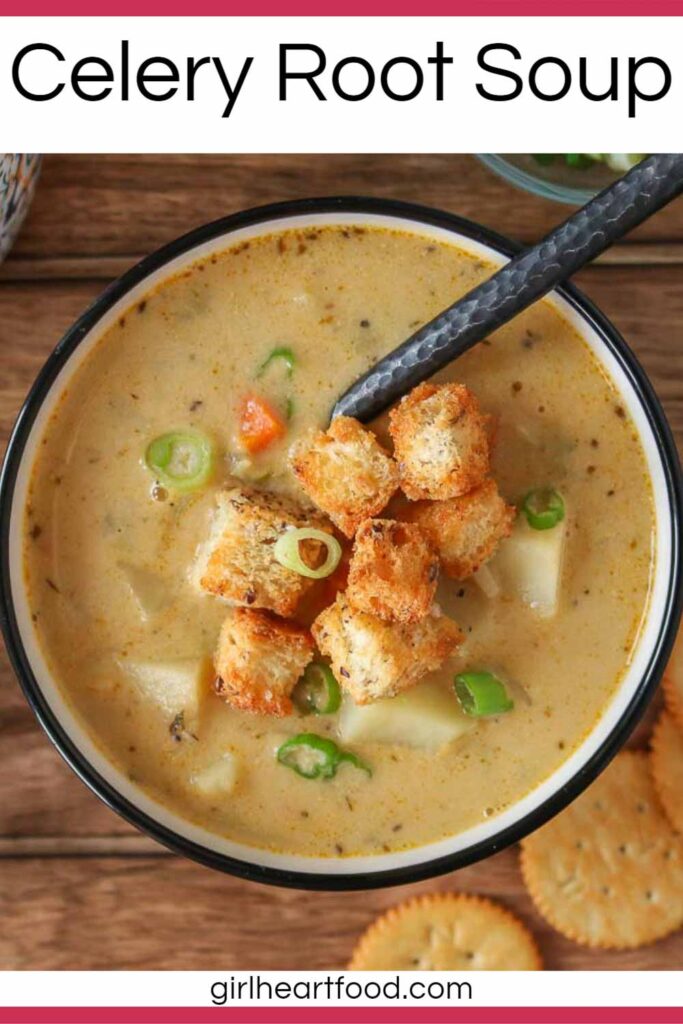 Chunky vegetable soup to warm ya up? Sounds good, huh? This celery root soup (or celeriac soup) is jam-packed with celery root and other hearty root veggies, like potato, carrot, and leek. It’s seriously delicious and just what you want on a cold winter day.

Bringing you a hearty vegetable soup recipe today and I couldn’t be happier!

There’s definitely nothing fancy here. Not even close.

I’d even go ahead and say this one is pretty rustic.

Who says something has to be fancy to taste good?

Once you give this celery root soup a try, you’ll be hooked. Promise.

What Is Celery Root?

Celery root or celeriac is a hearty root veggie that’s almost like a cross between turnip and parsnip/celery.

Though the name has “root” in it, it’s definitely not the root of celery. Nope, it’s something entirely unique on its own and deserves to shine!

You can find it along other root veggies, like beets, turnips, parsnips, and so forth right in your local grocery store or farmers’ market.

Friends, please don’t judge this veggie by how it looks.

This ain’t the prettiest veggie in the world.

One may say kinda ugly.

What this bad boy lacks in appearance, it makes up for in the flavour department. It’s also quite versatile! Celery root is lovely in soups and stews, mashed, pureed, and roasted.

The exterior and interior looks somewhat like a turnip, but it has a lot of celery/parsnip vibes in the smell and taste.

To prepare, you clean up, cut off the knobby bits, peel, and carefully cut into chunks. Basically, prepare it like you would a turnip or some beets.

You should definitely consider adding this veggie to your menu soon and, if ya do, I’d love to hear how you enjoy it!

I couldn’t stop smelling my hands after I had cut into in. I know, I’m an odd one.

Replace dairy in this creamy veggie soup with cashew cream. It’s seriously amazing how some cashews can turn into a creamy dairy free (but dairy-like) replacement!

How To Make This Root Vegetable Soup

Can I Blend the Whole Batch?

I happen to enjoy the texture of leaving some veggies chunky, but you do what makes your belly happy!

If you make this veggie soup, be sure to leave a comment below! 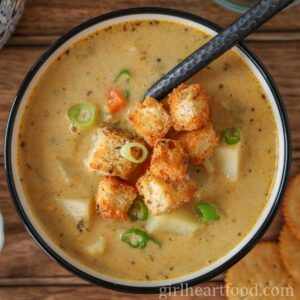